Now for Something a Little Different (Finally) 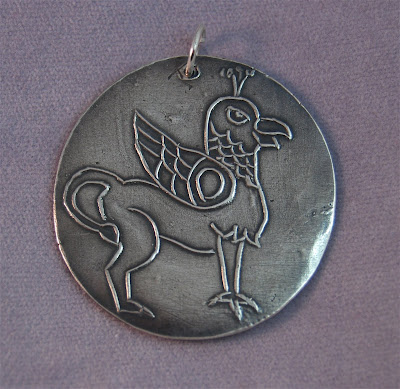 I've had real problems with time allocation these past months. I only have 1-2 hours maximum to work on jewelry / beading at night (sometimes less, depending on what's going on at home), after the Short One is in bed. I've found lately that most of that time has been eaten up with creating new finished jewelry and putting together project proposals for publication (and adminstrative stuff). While I've elaborated on bead designs I created earlier this year, I haven't really found time to do more than jot down ideas for new beads. I've found it a little frustrating. I decided the other night to just push everything aside and spend a little time trying to come up with something new.

I really love medieval bestiaries, which are basically compilations of animals, with illustrations and descriptions of each "beast". These lists throw together what we would consider both mundane and fantastic creatures - so, you might find snakes, owls, manticores and basilisks in the same manuscript, for example. The illustrations in the bestiaries are wonderful - relatively simple drawings but full of character. (If you are interested, you can view a few of these illustrations in the Wikipedia entry for bestiaries.)

So I chose this subject as a starting point - I decided to try to create a modern design of a mythical creature with similar clean, simple lines. I ended up attempting a gryphon, a beast which is half eagle and half-lion. I took a few liberties with the way I interpreted the combination of forms, though. This is kind of embarrassing, but I'm going to show you a few of my initial notebook sketches for the design. Once again, bear in mind that I don't have formal training and this stuff doesn't come easily to me: 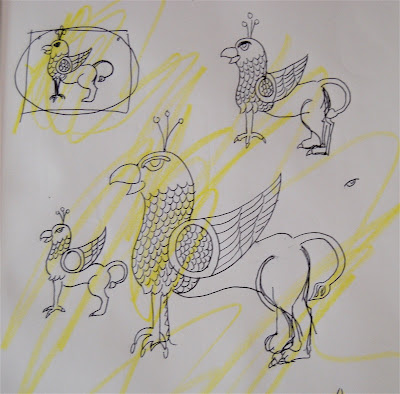 (Don't laugh, okay? Oh, and in case you are wondering, the yellow crayon marks are the SO's attempt to improve my design. We are nothing if not consummately professional, here.) The first draft is the largest image in the center - the progression is counter-clockwise from there. Despite some problems with the legs, I decided that the overall design was workable. (Don't ask me why I put a peacock crest of top - I can't really explain it. It seemed like a good idea at the time.) However, the image was four inches across - suitable for a breastplate maybe, but not a pendant. The top right image was the second try - still too big, and I was still having trouble with the hind leg. I broke down and looked up a couple photos of lions on the Internet at this point. Third try is at top left - size is about right, and I finally resolved my issues with the hind leg. However, after shrinking down the design, I felt that there was too much detail - the design seemed too cluttered. Also, I lost the glaring eye, which was a feature I wanted to retain. Fourth and final try is at bottom left - size is about right, and eliminating some of the detail around the breast simplifies the overall look and makes it feel sharper (at least, to me).

I liked number four, and that's the version I ended up carving out as a stamp. It's still a hefty pendant - at about 2" in diameter, it's as large as I'm likely to go for a single piece. However, I think it will be pretty easy to create a substantial necklace (the kind I like, after all) out of it. If I do this again (which I may - the gryphon was one of three options for mythical beasts that I considered before starting), I'll probably make the pose a little more dramatic. I deliberately avoided the segreant posture that you find in so many heraldic depictions of gryphons (rearing up on the hind legs, facing to the left), but the standing image is a just a touch static.

Anyway, so there you have it: my first really new pendant design since the spring - and a little exposition on my personal design process.

Thanks for visiting!
Posted by Melissa J. Lee at 1:09 PM

I'd love to see a video on your process. I don't have much perspective on making things like this. I took metalsmithing in college, but we never did anything like this.

I think it looks great! You did a really great job rendering the griffon. And no one should be laughing at your draft sketches - first off, they're rather good for someone without formal training, especially since they're of something that doesn't exist in real-life for you to reference, and the style is PERFECT for a piece of jewelry. Imo, it is a fabulous balance of something simple and, at the same time, intricate.

Hi Alexa, My hands are such a mess right now that I don't even do PMC project submissions, because I'd never be able to shoot the step-outs. Argh. I think this is the beauty of metal clay - you don't need a lot of technical knowledge to get a reasonable result. At this point, I'm dying to acquire more metalworking skills and learn lost wax casting, but I'm afraid it's going to have to wait until the SO is in school...

Thanks, Amanda! I seem to recall that you are a student. Are you studying art right now? Do you love it??

Thanks for taking the time to show us how you came up with the final version. Fun to see how others work. I can totally relate to finding time to make something new! My "to-do" list is full of anything but something new. Maybe I'll just do what you did and "Just Do IT". IT = something new. Nice post.
Bev

Hi Bev, Sometimes it's the only way to get things done! Have a great weekend!

Thanks for your inquiries, Melissa. ;) I took a few art classes in high school... I'm considering studying art - right now I'm just getting my associate's degree in liberal arts at the community college to transfer to the university, though, and they don't offer general ed art classes at the campus in my county.

I considered attempting to dual-degree and work on two degrees, one in liberal art and one in graphic design, but any of the graphic design classes I could have taken wouldn't count at all toward my general ed, so the rigorous idea just wasn't at all possible.

Look at me babbling about myself in your comment box!

Hi Amanda, If I understand you right, once you transfer, you will still have the opportunity to pursue it, right? Good luck with everything!

I really like the antique look. It's very different.

Absolutely correct, Melissa. (: Our university is supposed to have a decent (bordering on nice!) art program.

I'm really excited about the transfer because they offer glassblowing and metalworking and ceramic courses there.