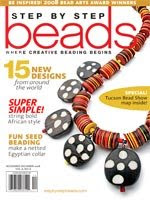 Greetings. I'm here to say that I have new work out in the Nov/Dec 2008 issue of Step by Step Beads. (Check out the beautiful necklace by Carter Seibels on the cover - is that not eye-popping? I love it!) This issue is kind of interesting, as it features work inspired by the art and traditions of countries from around the world. My necklace is called "Chinese Lantern" and features two beautiful coldworked, lampworked beads by Sarah Moran as focals - bet you can't guess what country I was inspired by, eh? It also showcases the 2008 Bead Arts Award winners - and there is some incredible work here. (You may not be surprised to learn that I favor the piece with the koi and lotus.) I think this is a great issue, and I'm proud to be a part of it. Thank you to everyone at Step by Step Beads!

On other fronts, the SO had a Halloween party at his Mom's Morning Away class today. I get the impression that there aren't a huge number of moms in my area that make costumes any more, judging from the reactions the SO received - anywhere from "I wish I had time to knit these days" (from a mother of three) to "You made that? Really?!? Do you do this for a living?" Since I hang out with a crafty crowd (all of you!), I was a little taken aback, since I don't think it's all that elaborate of a costume. Sometimes it's hard to remember that enjoying working with ones hands is not necessarily the norm. I'll be curious to see at what age the SO becomes embarrassed to wear something that his mother made - hopefully, that will be a few years off. In the meantime, I get to enjoy having a little pirate around the house.

Speaking of hand-made costumes, though, you SIMPLY MUST visit Kathleen Dougherty's blog and see the fabulous Marie-Therese costume she gave away last week (yes, I'm sorry that the contest has already closed, but it is definitely worth your while to give this one a look - over 1,000 people left comments, and it's not hard to see why). I discovered Kathleen's blog yesterday via Amy Locurto's blog (who has many wonderful costumes of her own on her blog - her family costumes, such as this one, are hilarious - scroll down to previous entries to see more). I made Amy's acquaintance recently through participating in Terrorific Tuesday this month. It's all six degrees of separation in the blogosphere, that's for sure.

Thanks for visiting!
Posted by Melissa J. Lee at 8:25 PM