The Naming of Cats 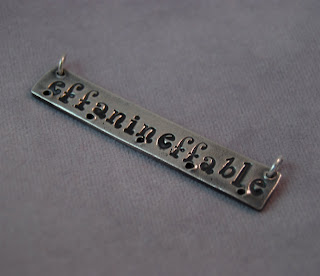 I really like the fact that the sky's the limit when it comes to word beads. There are so many interesting words to add to one's jewelry designs that there's not enough time in the day to come up with all of them.

I made this word pendant a little while ago. It's one of those projects that I feel only I will probably like, but I was compelled to make it, anyway. If you look it up, the word "effanineffable" does not appear in the dictionary. It's a T.S. Eliot-ism, and it appears in his poem "The Naming of Cats" from Old Possum's Book of Practical Cats

. The last few lines of the poem go like this:

Effanineffable seems even more, well, ineffable than the word ineffable itself. I like the thought of being inscrutable (no jokes, please, IHT), of being unable to be expressed in words. After all, at heart, we all have a part of ourselves like that, right? The words suggests that a person has a secret, that there is more to a person than meets the eye. Very feline, in fact. (I like T.S. Eliot, did you guess?)

So that's my word for the day: effanineffable. Thanks for stopping by!
Posted by Melissa J. Lee at 8:52 AM

Love stuff like this--makes it so personal. I think someone out there will know that word and think of the connection or instant bond you'll have! Fun!

Thanks, Candie! I hope you're right.

ineffable is one of my favorite words ... and so is ineluctable.

this has been true for years, and simply has to do with the sounds of these words...not as much the meanings!

Melissa,
Thank you for elucidating effanineffable. Coincidentally I saw the bead in your Etsy shop yesterday and wondered about it. I love the story of its creation.

Hi Mary! Thanks - it's pretty obscure, but I still felt I had to make it!