Every Good Pirate Needs His... 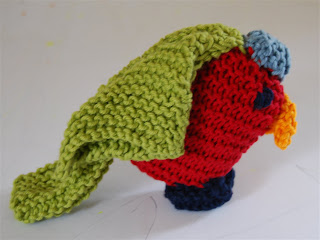 Even though the "Strands" in the title of this blog was intended to stand for yarn as well as jewelry, I know that I haven't been keeping up my end of the bargain where the knitting is concerned. So I thought I'd finally let a little garter stitch show its face here. This little piratey parrot was knit from a modified version of a bird of paradise pattern that appears in this stupendously good beginner's knitting book: Knit a Square, Make a Toy. I was going to recommend this one for any aspiring knitters, but I just found out that not only does the book appear to be out of print, used copies are going for $100-200 on Amazon. Yikes. I think I paid $1.99 for mine at Edward R. Hamilton a couple years ago. If only I'd known, I would have bought more copies.

Anyway, the premise of the book is that, if you can knit a garter stitch square of fabric, you can make a toy. This was a perfect project for my mother, who knows her knit stitch but does not know how to decrease, increase, etc., etc. So, we sat down, modified the pattern to be small enough to perch on the Short One's shoulder and changed the coloring and the wings and tail a bit, and then she knit each piece of the bird as separate little squares. The shaping all comes with the sewing and stuffing, and voila! a knit parrot. Brilliant. Now I just have to sit down and knit the rest of the costume. Argh. (Or should I say, "Arrrr.")

On other fronts, the past three days when I've gone to adjust the thermostat in the evening I've found it set 2-3 degrees higher than I usually set it. Either we've recently acquired house elves (in which case, I will ask them to give me a hand with the laundry instead), or the SO has finally found a way to reach the thermostat controls without assistance.

Ack, Lynn Davis has tagged me! Here are the rules for tagging:

1. Link to your tagger and list these rules on your blog.
2. Share 7 facts about yourself on your blog - some random, some weird.
3. Tag 7 people at the end of your post by leaving their names as well as links to their blog.
4. Let them know they have been tagged by leaving a comment on their blog.

1. I can't stand cilantro, lemongrass or ginger. Being Korean-American, I tend to get weird looks from the waiters when I mention that I don't want these ingredients in my food at Asian restaurants.
2. I once asked for a fork at a Chinese restaurant. See above statement on Korean-American-ness. In this case, the waiters were so stunned that the owner came out and had a (friendly) word with me. (Great restaurant, though - near Magdalene College in Oxford. I wonder if it's still there? I don't remember the name, though. My friends Sarah and James took me there. Do you remember, Sarah?) I can use chopsticks, but I hardly ever do so.
3. When I see a personality trait in the Short One that I recognize in myself, I wonder if he gets it from me. Then I wonder if it just means I'm immature.
4. My favorite chocolate is the Vosges Naga Bar

(or Naga truffle). It's twice as expensive as premium chocolates like Lindt, but, oh, how I love it so. I usually indulge on special occasions and holidays. (Hey, speaking of which, my wedding anniversary is coming up. Hmmm....)
5. Sometimes I think I enjoy playing with the SO's toys more than he does.
6. I wish I had a stunt-double to take care of the more irritating tasks in life. (Navigating phone trees, arguing with anyone over anything, etc.)
7. Even though I blither on and on ad nauseum on the Internet (and spent almost a decade as a lawyer), I'm very shy in real life. If I meet you in person but don't say much, it probably means I'm feeling embarrassed.

Cindy Gimbrone
Christina at This Girl Beads
Michelle McGee at Seriously. No Seriously.

Thanks for visiting! New work came out of the kiln today - I just have to burnish it, patinate it, etc., etc. I'm quite excited about one piece - hopefully, it will turn out well and I will be able to show it off tomorrow.
Posted by Melissa J. Lee at 11:57 AM

I LOVE this little guy!!!