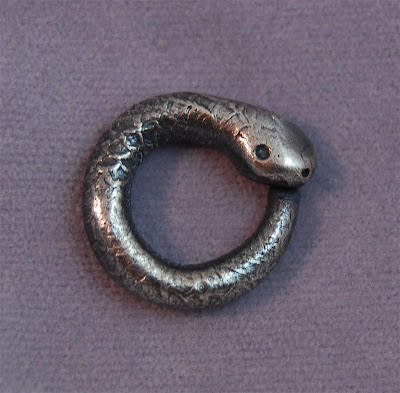 A while back in July, Lynn Davis had a great Studio Saturday post on Art Bead Scene, where she showed off some circle links she had made, among other things. At the time, I ended up being inspired to use some simple links I had made for another project in a necklace. However, I also had a brainwave and decided that a coiled snake, or a snake eating its own tail (an Ouroboros), would make a beautiful circle link, jotted a note in my ideas books and then - promptly turned to other things. I finally sat down a few days ago and decided to try to make one - here's the result. As is usual for me, I kept the design pretty simple, although I do like how the scale pattern turned out on the snake's body.

I didn't realize this at the time, but the Ouroboros is evidently a symbol of infinity or immortality and is an alchemical symbol. Needless to say, I find this all pretty inspiring from a design perspective. Also, as Lynn pointed out, the circle link generally is pretty versatile. I think this would make an excellent focal, part of a toggle clasp or a link in an over-the-top bracelet.

On other fronts, we took the Short One out to a local farm to pick pumpkins and have fun at the Halloween festival they had set up for the season. The farm does a nice job of it - pony rides, hayrides, corn maze, some carnival games and rides, even.

At one point, I found and gave the SO a big yellow pumpkin blossom to carry around. He was so pleased - until a goat came up and ate it. The word "unconsolable" doesn't even begin to describe what followed. The sheer tragedy of having a goat eat your flower was hard to even comprehend much less to convey to anyone else (although he tried). It was hard for H. and I not to laugh, but ultimately we managed to haul our wailing child over to the duck carnival game - the kind where the child picks a plastic numbered duck from a stream of water and gets a prize - and he won a big teddy bear, which managed to console him. It was hard to explain that he wasn't allowed to keep the duck, though.

Maybe it's just a lack in my childhood, but I don't remember farms running these types of fairs when I was a kid. It's a nice seasonal activity, though, and since the SO does not know what c-a-n-d-y is yet, a nice way to start celebrating Halloween without getting into what some might consider the really crucial part of the holiday. I just found out today at the SO's cooking class that there's a big apple orchard north of where we live, too, so I imagine that may be on our list of things to do in the next couple weeks.

Thanks for visiting!
Posted by Melissa J. Lee at 12:24 PM

I -love- the Ouroboros! You did a great job with it. (: I'm a big fan of symbols conveying ideas about infinity, immortality, eternity, and balance... plus, I dig snakes.
So naturally, I absolutely adore this little tail-eatin' sucker you've created here. I think the scale pattern is probably one of the most impressive things about it! It's not too distracting - which would make the scales look forced. It makes the link seem very alive.

Are you going to "torture" the SO in his teen years by telling his friends and beaus about how he cried when a goat ate his pumpkin? (My parents -still- like to talk about how I absolutely went insane when a dog at our family farm ate my pacifier.)

I don't remember mommy-child cooking classes when I was young... maybe I just grew up underprivileged. I think you're incredibly brave for even considering something like that with a child!

Oh, sure. I think it's a parent's prerogative to make fun of their kids every once in a while! Glad you like the snake circle link...

Melissa, that is nothing short of inspirational, I love jewelry with symbols and meaning and you have hit the top - love, love, love it!! Brilliant and marvelous! HIZZAH

Thanks, Lynn (and thank _you_ for the inspiration)!