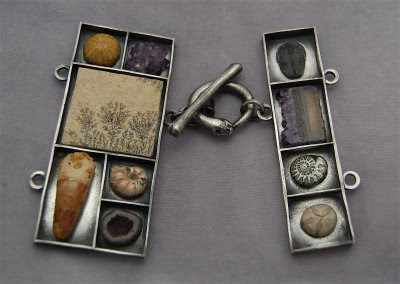 Well, if I understand the scheduling right, the judging for Bead Dreams 2009 should be finished at this point, although I don't think the winners have actually been announced. To be perfectly frank, I'm not expecting to place (although, of course, I'd be thrilled if I do), but I thought it would be okay to go ahead and show you my piece, which will be on display in Milwaukee at the Bead & Button Show starting tomorrow. Here it is: a belt buckle entitled "Natural History", which is a finalist in the metal clay category of the competition.

I have always been extremely interested in Renaissance-era cabinets of curiosity (also called cabinets of wonder). Towards the end of 2008, I started thinking about how to translate these artifacts into something wearable. In particular, I thought the specimen box format of the cabinet would lend itself to a unique display of found objects in jewelry. I initially created a box containing four objects, both mythical and more natural history-related. This piece is scheduled to appear later this year in a very special book, so I'm afraid I'm going to be keeping it under wraps for the moment. Because I liked the way this original box turned out, I decided to get more ambitious for my next piece, and spent the next several months collecting fossil specimens and designing a more complex box for them.

I have a rather nice collection of small fossils at this point in my stash. The ones that ultimately made it into this piece are an actual fossilized spinosaurus tooth, pearlized and pyritized ammonite, fossilized sea urchins, a fossilized trilobite and a small dendrite plate. The box itself, of course, is made from metal clay and the belt buckle closures are my usual snake and bone beads.

I really had no expectations of making the finals when I submitted this piece. For me, deciding to enter the contest itself is always the big hurdle - it inspires me to get an ambitious piece off of my sketchbook and turn it into something tangible. I tried several techniques that were new to me to make this piece, which I know is not the usual way one goes about entering a major contest, but, as I say, sometimes I really need the contest to get me to risk the clay to try new things - it's just the way my personality works. I am very happy with the way my "cabinet of curiosity" pieces have turned out. I suspect this may be my major work for the year, just as I feel that my entry last year, "I Think Therefore I Am" was my best work in 2008. (In fact, I am still working on various related necklace designs, which is quite unusual for me, as I tend to move on to new things once I've completed a big concept piece.)

I am completely delighted that the editors at Kalmbach judged the concept original enough to warrant inclusion in the finals of Bead Dreams 2009 - thank you so much. I hope that I will continue to learn and grow in my craft and will have something new and original to show for it next year, as well.

Thanks for visiting.
Posted by Melissa J. Lee at 12:01 PM

This is an amazing piece! You should be very proud. It shows a different approach to both something wearable, in the fact that it's not your typical jewelry piece, but also something that has a solid narrative behind the inspiration.

Stunning! I like the asymmetry of the piece. How big is it?

Thanks, Joann! I don't have the exact dimensions of the piece, but it's pretty big.

Melissa- you never cease to amaze me! I love this piece. Very different in style than anything I have ever seen. I would be surprised if you didn't place. I am leaving tomorrow for B&B and I will sure to look for it in person. Enjoy the day! Erin

That is so cool. I'll be looking for it at Bead & Button!

So incredible. I can see why they picked your piece as a finalist. I also a have a stash of fossils and I am constantly trying to figure out how to incorporate them into my bead embroidery. I love how you incorporated the "cabinet of wonder" idea.

Thanks, Erin and Christina! I'm hoping to get up there on Sunday to see it, myself. Will you still be around?

Thanks so much, Jodi. Your bead embroidery is incredible! I'd love to see how you incorporate fossils in your pieces.

Melissa,
This is a wonderful piece and a wonderful idea. I loved your description and my fingers are crossed that you will place!
Good luck and best wishes!
Sue

Thanks, Sue! Apparently, I got the dates wrong - the exhibit won't start until Thursday. Oh, well!

That's okay. I think they set up the exhibit yesterday so your dates weren't entirely off :) I hope they post the ribbon winners soon!
Best wishes!
Sue

Thanks, Sue - and may I say how gorgeous "Fiesta" is? I saw the pic recently on the B&B website.

Hi Melissa,
If you get a chance when you go to the show, can you write to let us know who placed in the seed bead division of Bead Dreams? I'd love to know all of the results and I can't find a single thing about them online!!!
Many thanks,
Sue

PS - Thank you for the sweet comment about Fiesta, I didn't know you'd posted it here! :)

No problem - I will check! Even though I don't think I personally placed, it's driving me completely bonkers not knowing who did!!

And I don't want to ask anyone I know who's already there to check for me, as I think they might feel awkward telling me that I didn't place (plus, they are probably crazy-busy with their booths, anyway)!

I'm not sure I can post from the show, but I should be back home around 5pm CST or so, so if there hasn't been an official announcement by then, check back here after 5.

Congratualtions, Melissa. You and your thoughts are spectacular!

all metal clay?? I need to get one of those new tiny kilns that run on regular electric current

It looks beautiful for me, Melissa! My warmest congrats!

Thanks, Barbe! There were 8 finalists in the metal clay division, all quite different in style.

(Actually my Paragon SC2 runs on regular current - I didn't need to the get the electrician in to hook it up.)

Thank you for visiting! I saw your necklace in the exhibit - it's completely beautiful!

Okay, for anyone waiting for SEED BEAD RESULTS, the winners are: 1st place - Hatsumi Oshitani, 2nd place - Kathy King and 3rd place - Sherry Serafini. I will have photos up of the seed beads winners, metal clay winners and my personal favorites sometime later today.

I'm so glad you were at the exhibition and saw all beauties! I'm dying to see all of them especially seed bead winners! If it's possible, share please the photos with me! My email is info@mylovelybeads.com