The Key to Imagination 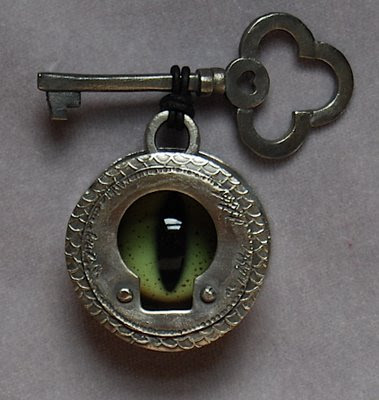 Well, ultimately, this will be part of a big concept piece (I hope), but I thought I'd show a "process" shot: here's what I'm working on at the moment. I'm a big fan of the lock and key motif that's so popular in jewelry design these days. Last year, I started pondering what I could do with the idea that would be a little different. At that point, I had a mold/stamp start to break on me. It was the one for this pendant: 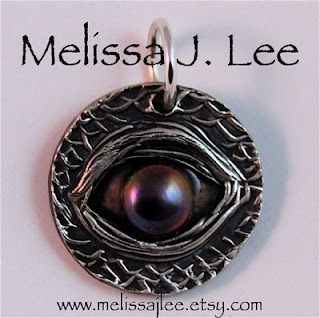 It was sort of a fortuitous coincidence. I knew I wanted to re-make a dragon's eye pendant in some form, but I didn't want to just re-make the same mold (although, really, I probably will re-make a version of this at some point, as I still like it). So, I thought perhaps I would combine the two ideas and create a little eerie eye through a keyhole. About 5-6 months ago I made a first version (yes, I really am that slow to design right now, sigh), similar to this dragon's eye pendant: 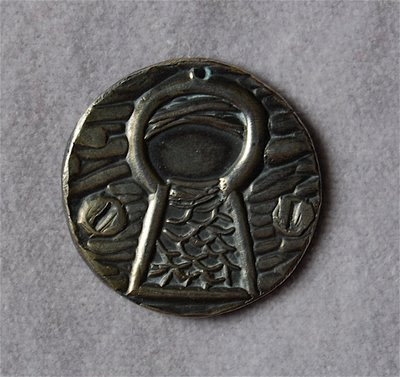 As with the original, I had intended for a pearl or amethyst cab to sit in the center with tinted resin. However, this draft has just sort of been hanging around unfinished for the past several months. Although I don't think there's anything particularly wrong with it, it just didn't have the right eerie quality to it - it was just a touch too flat.

So, I thought I would go ahead and construct a three-dimensional keyhole shadow box, instead. I made it particularly deep, to enhance the shadows around the glass eye. It works quite well in person, but - I have to admit - it made it difficult to photograph clearly today. Here's a nice shadowy shot of the pendant, though (H. said it was tough to tell in this particular photo that the object inside was an eye - what do you think?): 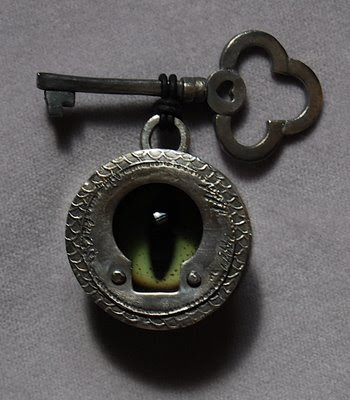 The key also ended up being a little tricky. My first version was a very organic "skeleton" key using my bone beads. I thought it would go perfectly with the pendant, but it ended up being far too heavy-looking for this design - I've set it aside for a different piece. Instead, I went back and designed a simple, classic antique key instead. It's not in my usual style, but I think it works pretty well here.

I also stamped one of my guerdon's on the back - "a fellow of infinite jest", a reference to, alas, poor Yorick from "Hamlet". 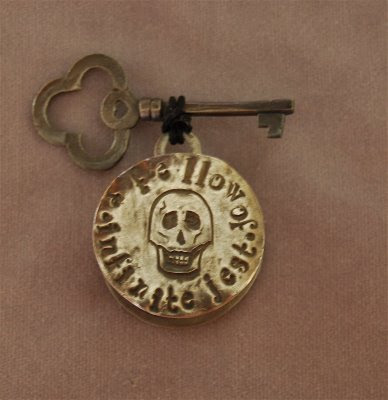 I'm still working on the clasp and gathering materials for stringing, so this project won't be a complete for a little while. However, I think I've made a good start.

I have to admit, I set out to make this piece purely for my own enjoyment, which I have not done for a while. It has turned out to be a very good reminder to me of something I think I've lost sight of a bit in the past year, namely, why I started making beads in the first place: because I love making them. Words to live by, right?
Posted by Melissa J. Lee at 2:32 PM

Oh Melissa..you had me at Hello! I love keys and locks...that is my logo and I am ever so happy that they are all the rage (although I would use them anyway). There is something so mysterious about a keyhole...and a little key...such treasures you make! And that is most definitely a sinister looking eye peeking out. Gives me the shudders, but in a good way! I really thought that was a real skeleton key...I think I may have one in my quite prolific stash that resembles it. How about a locket type that hinges open to view more of the beast within? Just a thought...I am sure that would be very complicated to pull off...but then again, you are extremely masterful with these things! I don't know much about how it all works. Egads! You have inspired me to write a tome! Enjoy the day, Melissa! Erin

can I come over for a week or so and learn from the side of the master??

Ahh....sweet, thanks for posting the pics.

Barbe, You are so sweet. It would be great to get together for studio time, wouldn't it?

Kate, Thanks for stopping in - your word means a lot!

Melissa you keep getting better! I think these are among my favorites of your works.

WOW! I'm with everyone else, that is fantastic!

I could definitely tell it was an eye!

I love it when designers share their step by step process, but it's really great when they are willing to share their thought process too! This is so mysterious looking!! It was hard to take my eyes off of it!

I love the keyhole with the eye! I bought a glass eye on ebay several years ago and wanted to bead around it similar to Laura McCabe's. Your idea is another great way to use these interesting objects.

these are incredible - and your photography is so wonderful that i feel like i am with the pieces... the multilayered construction and concepts - all executed brilliantly! have to look at your shop, i am new to you... love all of the pieces, but am so intrigued by your pieces with eyes - and your interest in dragons... have a great day...

Definitely a fantastic piece! I have been playing with the lock and key theme also, but your take on it is great!
Renate

Thank you all! I really appreciate your comments!

Oh wow - LOVE your 'Fellow of Infinite Jest.' What talent you have :)