When the snow melts, what does it become? 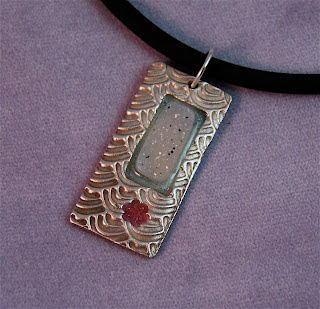 Right now, spring seems just like wishful thinking on my part. Temperatures have been in the single digits here and the wind chill has been in negative territory for a while. Nevertheless, I have been thinking of spring lately and spring themes. Here's the first sort of spring themed piece (I suppose it's more transitional - more on this in a minute), but hopefully not the last, from me. By the way, I realized last night after posting my blog entry that I'd complained about not wanting to make floral pieces and, of course, this has a flower in it. It's not overly floral, though, right? Right?

This pendant was inspired by a riddle that appears in a very popular Japanese shoujo (meaning, for girls) manga that's currently running in the US called Fruits Basket. I've thought about it, and there's pretty much no way I can accurately describe the plot without it sounding completely like something you wouldn't want to read, so I'm not even going to try. Suffice it to say that it involves a rather pure-hearted but likeable protagonist and, apart from a dubious student-teacher relationship (which seems to be a very common theme in shoujo manga, unfortunately) of which I completely disapprove, I wouldn't mind if the Short One decided to read it, er, once he learns how to read. Seeing as he's a bit of a manly little man, I doubt he'll ever be interested, though.

At any rate, at one point in the story, one of the characters poses a riddle to another, which goes something like this:

"When the snow melts, what does it become?"
"It becomes water, of course."
"Wrong! It becomes spring!"

I've been wanting to make a piece of jewelry that depicts this riddle for a while now. (In fact, this may not be my only attempt - I'm quite fond of this notion.) Last week, I visited a rock shop in the town where we used to live before the SO arrived and picked up a couple things, including a few small Brazilian druzy quartz cabochons. A couple of them were snow white and reminded me very much of ice crystals. So I designed this pendant where the druzy symbolizes winter and the flower beneath it, of course, symbolizes the coming spring.

Okay, the SO has been vomiting for the past half hour. It seems he's picked up a stomach bug. I need to sign off - I'll be back when I can. ' Night.
Posted by Melissa J. Lee at 8:01 PM

Love love your new piece. Amazing as always. Sorry to hear the short one is not feeling well hope he feels better soon.

Hey Melissa,
I couldn't see your new piece, the image didn't open on my 'puter. DARN!
I'll check back again later.
Hope the SO gets better soon. yuck

Hi Melissa
That is a lovely piece.Sorry to hear that the SO is not well.Hope he is better soon.

I ADORE the new piece! It is absolutely gorgeous.

Hope the SO is feeling better.

Thanks for all of the kind comments. The SO is feeling a lot better now. Not quite back to his rambunctious self, but cheerful. I'm glad everyone likes the pendant!