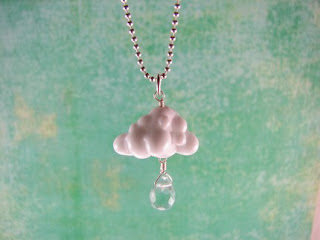 I just bought this cloud pendant from Rachel Place's Etsy store, Sugartoppers. Isn't it cute? The funny thing is, I'd been thinking about necklace designs with cloud themes lately. I think this bead will work perfectly with a design I currently have in my sketch book. Anyway, Rachel has a bunch of new work, including the cutest lampworked robots I've ever seen. I highly recommend checking her store out.

I had kind of a frustrating weekend. I ended up wearing the "What happens when the snow melts" pendant on Saturday, and I lost it. I had it on a simple chain which should've been fine, except I was carrying a load - messenger bag slung across my chest, diaper bag and the Short One. Somewhere along the way (probably at the grocery store), I think one of the bag straps must have inadvertently yanked the chain off, and I didn't notice until later that evening. I was completely bummed out. I'm usually disappointed when I lose something, but there's something about losing a piece that I've invested time and effort to make that's particularly disheartening. I have bad karma where that particular grocery store is concerned, too. Last spring I'd just finished knitting the SO a nice hat out of a beautiful shade of Koigu merino wool and, yep, I managed to lose that in the store, too, the very first time the SO wore it. Anyway, I think I just need to face facts and stop wearing any jewelry until the SO is a little older and doesn't require quite so much gear. (When will that be exactly, I wonder?) Kind of ironic, really.

On the plus side, I do have one more white druzy quartz cab in my stash. It's not quite the same size or shade, but I should still be able to make one more "What happens when the snow melts" pendant. Also, I've been working on my project for Ornament Thursday (which is this Thursday), and it's coming along quite nicely. I hope you'll visit later this week, to see it.

On the home front, I've decided that the Husband is not longer allowed to take any business trips. (Won't his boss be surprised when I 'phone him up to tell him this?) Every time H. has gone out of town this winter, we've had a huge snow dump in his absence. Tonight's snow was particularly annoying, as it was quite wet and heavy - very hard to shift. Plus, I haven't yet figured out a good way to handle shoveling with an active toddler in the house.

I hope everyone had a good weekend. Thanks for visiting, as usual!
Posted by Melissa J. Lee at 10:30 PM

This piece is very pretty! I enjoyed reading your blog. Jo :)

A very pretty pendant! Sorry to hear you lost your necklace.

Thanks for your sweet words about my piece. I can't wait to see where your imagination takes it next. I am so sorry to hear you lost that pendant.

I love your blog.Hope the snow stops soon and I'm really sorry to hear about the pendant.

That's such a great pendant!

What a bummer about your pendant! I'm not surprised it wasn't turned in to lost and found. When I was growing up in Illinois, my mom found a local teen who needed cash and she always paid them, nicely, to shovel our drive when my dad wasn't around.

Hi, Jo! Thanks for stopping by, again.

FP, as you can see, your pendant has been a big hit! Do I see more of these in your future? :)

Christina, Gladys and Jenn, Thanks for commiserating about the lost pendant. I suppose the upside about losing something that one makes is that there is (usually) the opportunity to try again. I'm glad I have that second druzy quartz cab...

Jenn and Gladys, Thank you! We had a few more inches after I shoveled last night, but the Husband is back home and took care of it for me. Jenn, I wish we had more teenagers in the area. It's either empty nesters or a couple toddlers, and I don't think I could pay either group to take care of our driveway. I suppose you never know, though...