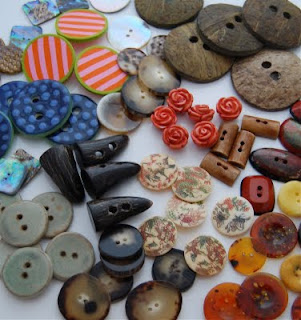 The jig is up.

Way back in the mists of time when I called myself a knitter only and not a beader, I collected buttons. Much as I think that the right clasp for a necklace can make or break a design, I have always felt that the right buttons make or break a piece of knitting. I don't care how beautiful the knitting, or how beautifully finished a piece of knitting is - if it has the wrong buttons, it won't look good. As a knitter, I always bought buttons in certain quantities - the number I would need for a cardigan (of my preferred length) plus one extra, in case I ever lost one from my garment.

I have a fabulous button collection - I won't even attempt to deny it - and each button has it's own provenance. The photo ab0ve represents just a portion of my hoard, and I pretty much remember where I purchased each set. The very first year I attended Bead & Button, I bought buttons only - the collection in the bottom right hand of the photo is from that trip. They are all carved from Baltic amber. The ceramic celadon ones in the lower left hand corner I actually made myself, back in the days I took classes at a local pottery studio. The owner was reluctant to allot me kiln space for buttons, but he let me fire them on top of one of my unglazed plates. The horn and shell buttons in the center I purchased from one of the large London department stores during a trip to England with my mother. This was a very important trip for me not for what happened during the trip, but more for that fact that my then-boyfriend discovered that he missed having me around, and I think decided at that point that maybe getting married would be okay after all (H. will probably deny this, but a woman knows - wink).

Even after I started beading, and even though I love using buttons as closures on jewelry as well, my button stash was sacrosant, as I never wanted to break up a set and not be able to use it on a nice piece of knitting (and let's face it, I protect my hoard of stuff better than any dragon). But, well, last night, I was putting together a design, and, as is often the case for me, I couldn't find just the right clasp. I debated, I hemmed, I hawed, but ultimately I broke into the button box and - sure enough - the perfect button for the piece was lying right on top. And it does, in fact, look beautiful on the necklace. Sometimes you just have to let go, right?

So, again, this is just a suggestion to you (and a reminder to me), when looking for the best closure for a design, try unexpected places - you might be pleasantly surprised by the results. And button-hunting is so satisfying in itself - from rummage sales to fabric and notions stores, bead stores, knitting stores, all the way up to gorgeous art buttons and the high end button emporiums like Tender Buttons (in New York - there used to be one in Chicago, too, on the Gold Coast, but I'm not sure it's still there) - there's always a beautiful button to be found somewhere!

Thanks for visiting.
Posted by Melissa J. Lee at 12:15 PM

I totally identify with your post today. In my life before beads, I was also a knitter. I still dabble in it when I need a break from the beads which means I don't do it very often these days. I have to agree that the buttons on the icing on cake of a piece. You can knit the most beautiful sweater, but if the buttons are wrong it totally ruins the work. I personally waiting for the day my mother gives me her button collection. As a child I could spend hours sorting through all the buttons. I'm not sure I could bring myself to separate a set, but you never know.

Buttons are a topic unto themselves - I wonder why so many people remember playing with their mother's/grandmother's button collection? Those amber buttons are really beautiful!

Jodi, It was tough to decide to use it - but I think it will all work out, since I always buy an extra button in case of breakage or loss. I'm the same way about yarn - I always buy enough (if available) to complete a full sweater project. After my son was born, I started raiding my prized yarn for his hats and blankets, but he's the only reason I'd actually break up any lot of yarn.

Christina, I totally know what you mean! I have a few huge, bezel-set stone clasps from A/D Adornments that I purchased at local shows - and apart from one that I used to make a gift for my mother, they are still waiting for a project that's "good enough".

Stregata, The first time I ever visited Korea, I remember seeing the most gorgeous buttons - honey-colored amber. These don't really look like the Korean ones, but I coveted them so much as a girl that I couldn't resist picking these up at Bead & Button when I saw them on an amber merchant's table.

The buttons are beautiful! Thanks for the reminder to think outside the box when adding a clasp. I tend to reach for the same one--a simple toggle that goes with anything.

I love buttons and your collection is to die for. I have a stash of buttons from grandma and I can't bring myself to use them.
I remember as a child I swallowed one of my grandma's buttons because it was soooooooo pretty and I wanted it to be "with me" forever.
As a child you don't think about the "outcome."