The Moons of Saturn Got in My Eyes 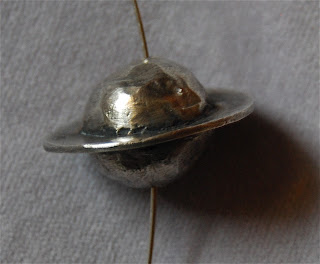 Here's new work from me - the first bead in a series. If I were actually organized about this, I'd wait until I had more of the beads finished to show them as a group, but given my current stunning rate of progress, that could be at the end of 2009, so I'm just going to introduce them on the blog as I get around to making them.

The inspiration behind this is a bit oddball - it comes from the quote above, which Lucy van Pelt said to Charlie Brown to explain why she (yet again) managed to miss catching that pop-fly ball during (yet another) sad baseball game. I can't really explain why I was thinking of this particular strip, except to say that, as a child, I was a huge "Peanuts" fan. I love comics and I still read them (for one thing, I started re-reading "Calvin and Hobbes" after we found out that we were going to be having a little boy), but I don't think I've loved any comic as much as "Peanuts". From the quote, I started thinking about, well, Saturn, and the solar system, astronomy, life, the universe and everything and decided that maybe I'd start out by making a Saturn bead.

This is kind of embarrassing to confess, but this was actually my first time using cork clay. Call me a paranoid mother (well, I am a paranoid mother), but I haven't wanted to use it, due to potential toxicity of the fumes during burnout. (If this is all Greek to you, let me just say that cork clay is sort of a modeling compound used by metal clay artists to create a base for larger beads. The cork clay burns away in the kiln leaving a nice hollow silver bead behind.) As it is, I ensured that the SO wouldn't be anywhere near the kiln (I usually ensure this anyway, for obvious reasons) during firing or for an extended period after firing, to give the garage a chance to ventilate.

I'm pretty happy with the results, although the bead is slightly heavier than I intended. As you may know, I hardly ever use a ruler, and I don't really like perfect geometric shapes in my work. I wanted a somewhat rough-cut, rugged looking sphere here. I added a heavy patina and then polished the bead, to bring out a little depth.

Believe it or not, I should have more new work to show tomorrow. It's a bit of a bagatelle, a frippery of a bead (in a geeky sort of way), but it's one that I've been wanting to make for a while, now.

ps. I almost forgot! For any knitting fans out there, it's Vickie Howell's 35th birthday today. To celebrate, she's giving away 35 fantastic craft books from Lark. To wish her a Happy Birthday and enter, please go here.
Posted by Melissa J. Lee at 6:49 PM

I love your awesome Saturn bead!

Megaman3062 - received your comment. Thanks! Unfortunately, this bead is currently not for sale. If I sell a version in the future, I'll be sure to announce it on the blog.

No measuring! That is so me!
Actually, I had to comment...my son is named Calvin after, you guessed it! Calvin and Hobbes! (And he totally lives up to that name now and then!) It has been so fun sharing all those comic strips with him. At 12 he totally gets it!
Enjoy the day!
Erin

I'm too scared to read Calvin & Hobbes now! I like the name Calvin, though!