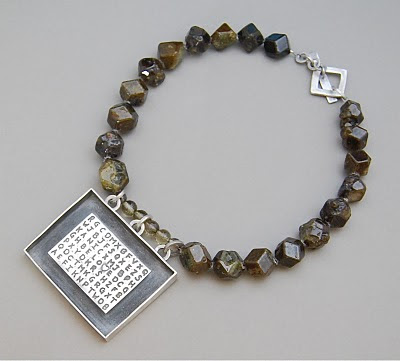 The winners will not be announced for a few more weeks, but I can now share the news that I am a finalist in the 2010 British Bead Awards. Here's one of my two pieces. As you can see, I've continued with my "Love is a Puzzle" series, here, this time with a word search design instead of a maze.

I called it "Words of Love", but that's actually a bit of a misnomer, as there's only really one loving word in this piece. Can you find it? I've designed mazes before (at least on paper - "The Way to My Heart" was my first attempt to translate one into silver), but this was my first attempt at putting together a word search. I wanted to ensure that there was only one solution to this puzzle, but I found it was irritatingly difficult to prevent myself from unintentionally spelling words when putting this together. I think I managed it, though. I think. (If you find any others, don't tell me - I don't want to know!)

As usual, this piece was inspired by my son's love of puzzles. As a preschooler, the Short One's spelling is still pretty shaky, but it doesn't prevent him from poring over word search puzzles and making up his own words. As for me, I just thought the display of letters had nice, graphic appeal and tried to translate that into a piece of jewelry. I made this piece specifically to enter this year's British Bead Awards. I wasn't really sure anyone else would agree with my point of view on this one, so I'm particularly pleased that "Words of Love" was juried into the finals. Winners will be announced at The Big Bead Show in England on October 30, 2010. Wish me luck!

Go here to find out more about the British Bead Awards and to see a photo of my prize-winning piece from 2009 ("Cabinet of Curiosity", pictured at the bottom of the page on the right hand side).

ps. For anyone interested, the beautiful, rough crystals I strung with the pendant are green garnet.
Posted by Melissa J. Lee at 4:47 PM

Thanks, Diane! I just need to get off my butt and start working again, now...

Congrats Melissa. I think it is a great idea to use a word search puzzle. looks great too.

That is just the most brilliant idea, Melissa! I love puzzles and this is a wonderful tribute to your son's loves.
Thank you for sharing. Congratulations!
Enjoy the day.
Erin

Congratulations! I am a finalist too so am going down to Surrey in a couple of weeks (a bit easier for me than you!!). I can't wait to see your piece in the 'flesh' - it looks gorgeous here!

I love your piece, Melissa. And green garnet is one of my favorites! Congrats on another big win.
Erin S

Thanks all! Congratulations to you, too, Rebecca! One of these days I hope to make it to the Big Bead Show. I used to live down south in Brighton - I miss England...

Just lovely Melissa. Congratulations!
And, you must show us your other piece.
Fingers crossed for 10.30.10 ....

Congrats! I love the idea of using a word search puzzle for a focal.

Thank you! It's so nice of you to continue to check in, despite my habitual absenteeism...