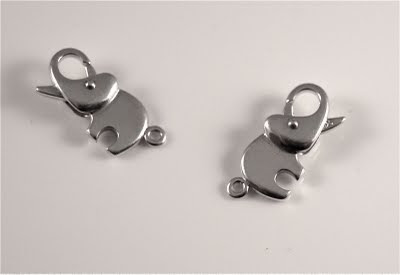 I had a very kind inquiry about my whereabouts earlier today, and I'm checking in to say that I'm completely fine - just feeling a little tired.

I must confess - I arrived home from our Thanksgiving travels not merely uninterested in beads and jewelry but downright disinterested. So disinterested, in fact, that I tucked away the two containers of beads and findings I brought back with me and never even bothered to unpack them. So I ended up taking a bit of unexpected time off.

Instead I have spent the past couple weeks organizing. My husband and I tended toward clutter even before the Short One arrived on the scene. Add in all the SO's accoutrements in the mix along with all of my jewelry designing tools and sheer stash, and it's been chaos in our house for the past several years. My reason finally snapped audibly two weeks ago, and I announced to my family in no uncertain terms that we were going to clean out our living area if it killed us. H. - who is all too familiar with the whole Spouse-on-a-Rampage Syndrome by now - has been speaking to me in that too-reasonable tone of voice one tends to use with the mildly insane since then, but by golly, the house is more liveable than it has been since, uh, 2005. When we moved in.

Anyway, as I say, I received a thoughtful inquiry about my dropping off the face of the blogosphere today, and, after some consideration, I tentatively spent the evening getting caught up on my blog reading. Which got me excited about beads again. Which made me think it's time to get back into the swing of things.

Heck, I even opened up my boxes of new acquisitions. Which brings me to the above photograph. These clasps were completely new to me, and they're the sweetest rendition of your basic lobster claw clasp (elephant trunk clasp?) I've ever seen. Seriously, aren't they cute? Wonderfully functional, too. If you are interested, they are available through Bruce Frank Beads. (EDIT: -but not through their on-line store. You'll have to call them directly if you want to order some. Just FYI!)

Thanks for bearing with me! Have a great weekend.
Posted by Melissa J. Lee at 10:28 PM

Hey Melissa,
I can totally relate about getting the organizing bug. It can be especially hard when it seems the beads multiply all on their own. Hang in there!

Yay! I missed you. Glad to see your posts again.

Those elephant clasps are so cute! I can't wait to see if more animals will follow... :-)

Yup, I tend toward the clutter too and have been feeling the need to clean. Sounds like a good thing you tackled it, it seems to have re-set your creative engine.

Love the elephant clasp, such an elegant interpretation of the lobster clasp. Look forward to seeing what you make with it.

The elephant clasps are incrediable. I have a fascination with them.

My husband and I are polar opposites with it comes to organization and clutter.

The nice thing is - a week has passed and it's still organized and clean! That hardly ever happens. :)