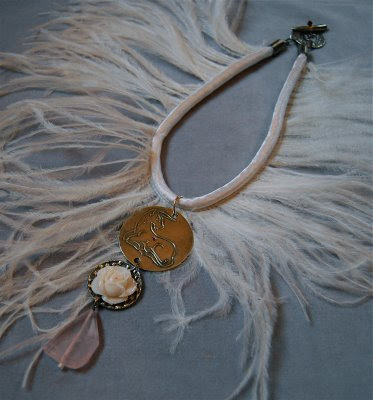 I thought I'd share this with you today, even though it's no longer quite seasonal (I envision it as more of a winter piece, for some reason). Here's my unicorn pendant along with a coral rose set in a shallow checkered silver dome with a chunk of rose quartz.

I like the way the rolled/stuffed nylon cord looks, but I wanted to try something different with it, so I stitched feather trim along the underside. It doesn't show up in this photo, but the toggle ring is stamped with the words "noli me tangere" which translates as "touch me not". The toggle bar is horn-shaped.

Even though the image on the pendant is that of an unicorn and not an hind, this piece was inspired primarily by the poem "Whoso List to Hunt" by Sir Thomas Wyatt:

Whoso list to hunt, I know where is an hind,
But as for me, hélas, I may no more.
The vain travail hath wearied me so sore,
I am of them that farthest cometh behind.
Yet may I by no means my wearied mind
Draw from the deer, but as she fleeth afore
Fainting I follow. I leave off therefore,
Sithens in a net I seek to hold the wind.
Who list her hunt, I put him out of doubt,
As well as I may spend his time in vain.
And graven with diamonds in letters plain
There is written, her fair neck round about:
Noli me tangere, for Caesar's I am,
And wild for to hold, though I seem tame.

(By the way, the hind in this poem was supposedly Anne Boleyn, ill-fated wife of Henry VIII - with "Caesar" being a reference to Henry VIII himself.)

Thanks for visiting.
Posted by Melissa J. Lee at 2:52 PM

Very lovely piece sends me back in time, Melissa! That is a wonderful place I truly like to visit.

LOVELY! Now, where can you suggest I look to buy the feather trim?
On another topic, I just purchased a bead spinner with curved needle. Do you have any link to a video showing just how to use this. I cannot seem to get the knack..

If you ever have ANY trim needs, M & J Trimming (they are located in the Garment District in NYC) is the place to go - www.mjtrim.com . I'm not sure about the bead spinner - I have never used one myself!! If I find a link for you, I will post it here!