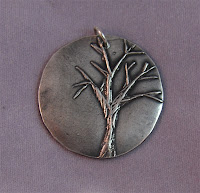 Sigh. A couple days ago, a friend kindly told me about a call for entries closing today. I've spent the past 48 hours writing up projects due in at the beginning of October, firing new pieces and frantically trying to make a few new jewelry designs to submit for this call. Last night, I had everything set out to get to work designing when the Short One woke up from what was evidently a bad nightmare and started screaming. Poor little guy. By the time he calmed down and finally fell back asleep it was already 3am, and there was pretty much no way I could work and still get enough sleep to function today, so I had to bag my plans. I managed to string one very simple project this morning in the kitchen (the counters are the only things high enough to prevent an interested party from getting to all of the components) while drinking my morning cup of coffee, but that's pretty much it.

I think I have to sit back and be more selective about deadlines and just recognize under the circumstances that I can't do everything. Obviously, the SO comes first in my list of priorities. I just have a hard time letting things go. Also, with my background, I'm used to last minute projects and working overtime, so I think I overestimate what I can do and still take care of the little one on the morning. (I never pulled an actual all-nighter as a lawyer, but I did have nights where I worked in the office until 4-5am. I still remember one of the junior associates in the office down the hall who would show up at my door in the morning dunking a tea bag in his coffee to try to get a little extra caffeine in his morning pick-me-up. I'm not sayin' this is a good thing, I'm just sayin' that he did it.)

Anyway, sorry for whining! I will have some new work to show you tomorrow. In the meantime, here's a photo of the pendant that I used in the project in the November issue of BeadStyle. It was inspired by Ray Bradbury's book The Halloween Tree

Thanks for visiting.
Posted by Melissa J. Lee at 9:05 AM

I can relate, and I don't have short people around my house, just studio dog, very low maintenance. I've been prepping a case for trial this week (but I'm not a lawyer), stumbling around on very little sleep yet trying to edge in some creativity too - I didn't know you were a lawyer in another phase of your life! You must be an expert at prioritizing, to keep so much going at once.

Hi Lynn - you are so prolific, though! You do so much good work, it makes me envious. I just end up sacrificing a little sleep to get things done. In the long run, it probably isn't a good idea. I've had more colds this year than ever - I need to figure something else out...