You Always Remember Your First Time 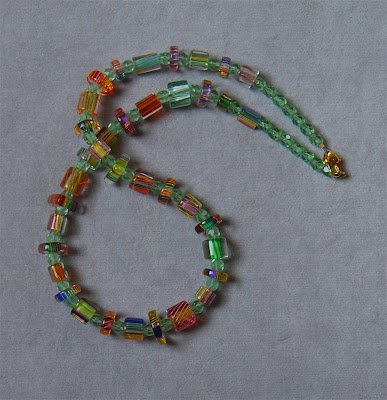 I found something rather nostalgic the other day while rummaging around looking for yarn with which to make the Short One's Halloween costume. I had cleverly hidden away a jewelry box amidst a whole crate of fiber (and I wonder why I can never find anything in this house) a while back, evidently in an effort to foil the SO's curiosity over the little non-child-safe items inside. Inside the jewelry box were, well, several non-child-safe pieces of jewelry (surprising, no?), including this necklace.

This is the first piece of real jewelry I ever made. (Well, what did you think I meant by "first time"? Eh?) Back in the days B.S.O. ("Before Short One") I worked about a block away from a rather nice bead store. The ladies in our office decided it would be fun to take a basic beading class after work one day, so we all signed up and spent a happy half hour shopping for supplies before attending the class.

As a college student, I had always drooled after some lovely glass bracelets sold at an upscale gallery in Copley Place in Boston. The glass beads were barrel-shaped with brightly-colored stripes suspended within them. I didn't know at the time that the beads were furnace glass - I just knew that I couldn't even come close to affording a bracelet. So, when I saw a bowl of similar-looking beads at the bead store, I pounced on them and bought what I thought were enough to make a nice bracelet. And those were the only beads I bought for my project.

Well, of course, once class started, my instructor patiently pointed out that if I only used flat-ended barrel beads, the piece wouldn't be flexible enough to actually drape around my wrist. "You need spacers", she said. "What's a spacer?" I replied.

Ultimately, I ended up with this simple necklace and a pair of my very own jewelry pliers (I had no idea they were called "crimping pliers", nor did I realize that the tubes I had flattened with such care and anxiety were called "crimps") to take home with me. I wore it a handful of times and then it got relegated to the jewelry box where I found it again this past week. After that, I picked up the odd beading magazine from time to time, and even bought a few beads, but it was really several years before I started making my own beads and designing jewelry (and started this blog).

Still, it's nice to remember where it all began. Especially when I go through periods where I feel that I'm not advancing in my skills (like now), I think it's useful to look back on this first piece and realize that I have made progress and that, like everything else, acquiring expertise in any field takes time.

I think your first piece is lovely, Melissa! I can't show you mine because I made it for my mother when I was 3 or 4 :-)

I was very much into furnace glass when I first started as well. I still am, they're great.

It's nice to look back and see just how far you've come. :)

I love the design, pretty good for your first time! I can't even remember my first design. I suppose that it was probably something in macrame. I used to love to macrame.

Cyndi - hee, hee, I thought you might say that!

Hi Rach - there's something irresistible about the glass, don't you think? It always reminds me of allsorts candy, too...

Sara, Thanks for stopping by! I know that Sarah Moran uses a lot of macrame in her finished jewelry - I really like the way it looks. It's something I'd like to try.