Happy Are They Whom the Muses Love 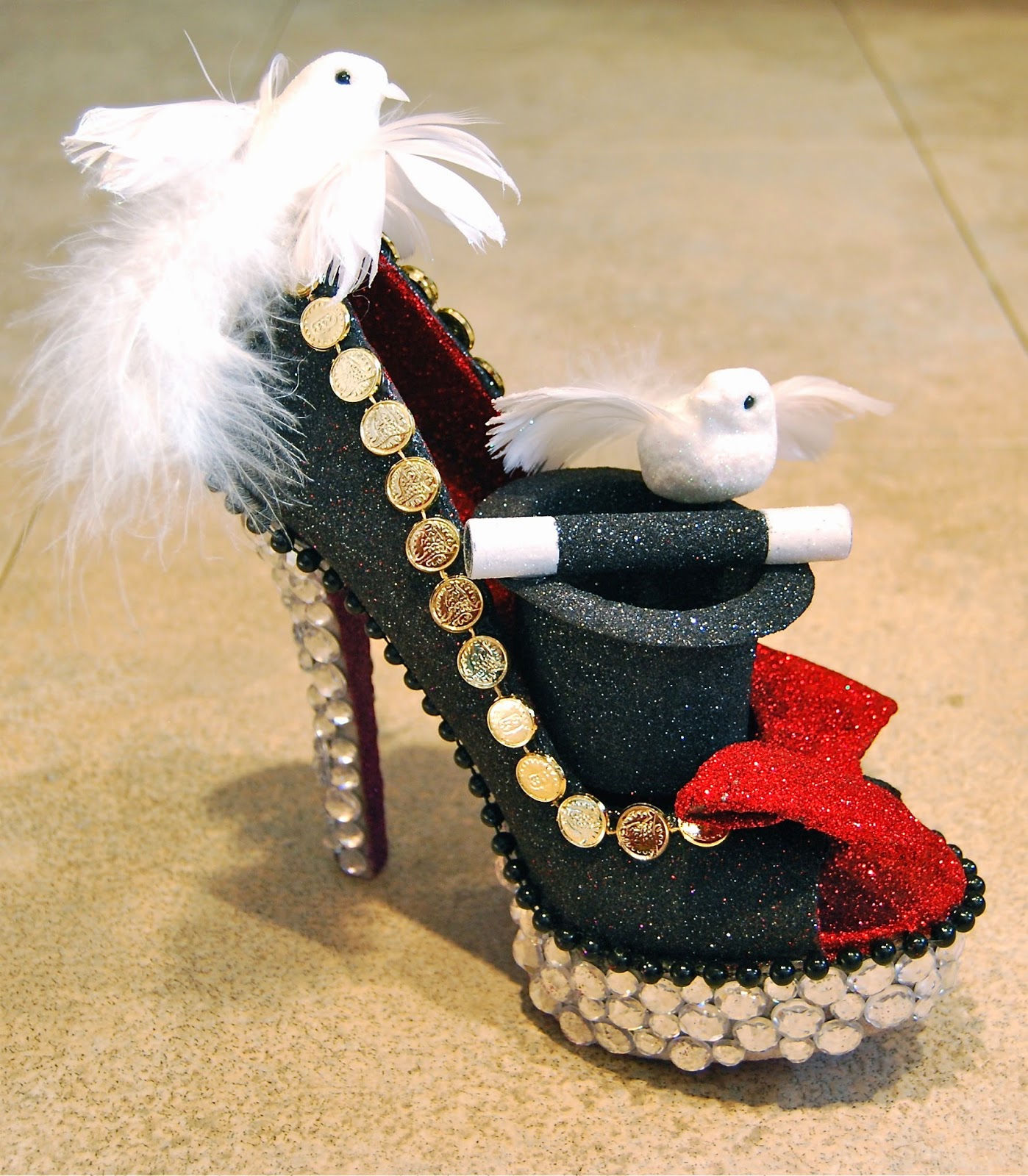 Hello, anyone out there?!?  I have no idea if anyone is still reading this blog after my continuing, years-long hiatus, but I've recently been inspired, so I thought I'd at least go ahead and post.  I have no idea why, but after ignoring Mardi Gras for the better part of my life, I suddenly decided this year that it would be fun to celebrate and introduce the Short One (who, after a couple of years, is no longer all that short) in a modest way to Carnival.  Naturally, I decided this about a week before the day, but thanks to some very efficient sellers, I had just enough time to order some beads and a lot of old doubloons off of eBay.

I also picked up a King Cake locally.  The SO was all "They put a baby in the cake??  Why do they put a baby in there?  That's kinda gross, Mom!!  No way; I don't want the baby!"  After thinking about it, though, I think he decided he wouldn't mind to be king for a day - as my husband would say, "And how is this different from any other day in our house?!"  Just by sheer luck he did get the baby, and he was (secretly) very pleased about it - the baby is currently residing with his well-loved doubloons and beads.

So, the SO enjoyed our little celebration and moved on to other things, the way you do, but I started learning more and more about New Orleans (which I have never had the good fortune to visit) and the history of Mardi Gras.  I got interested in the krewes, especially the all-female ones, like the Krewe of Muses.  For anyone reading this who doesn't already know, during the Muses' parade, they give out highly coveted, highly glittered, hand-decorated shoes as their signature Mardi Gras throw.  The designs can be over-the-top wonderful, and I have rapidly become obsessed with these iconic shoes.

After reading Muses' member Nori's wonderful blog, Confessions of a Glitter Addict, I became increasingly inspired.  My design book, which is still languishing with many unfinished jewelry designs, has been filling up again.  I decided to try creating a few shoes of my own.  Here's my first attempt.  Honestly, I'm not sure if it's done yet - I'm thinking of putting "ABRACADABRA" lettering down the side.  Also, I really wanted a white rabbit popping out of the hat, but the only one I found that was the right size was a cute plush finger puppet - the plush just didn't look right with the glitter (in my opinion, anyway).  So, anyway, I used the doves instead, but if I could find the right rabbit, I'd totally try this idea again.

Being a novice glitterer, I'm having a tough time showing the sparkle.  Here's another shot - not so great on detail, but it sparkles better: 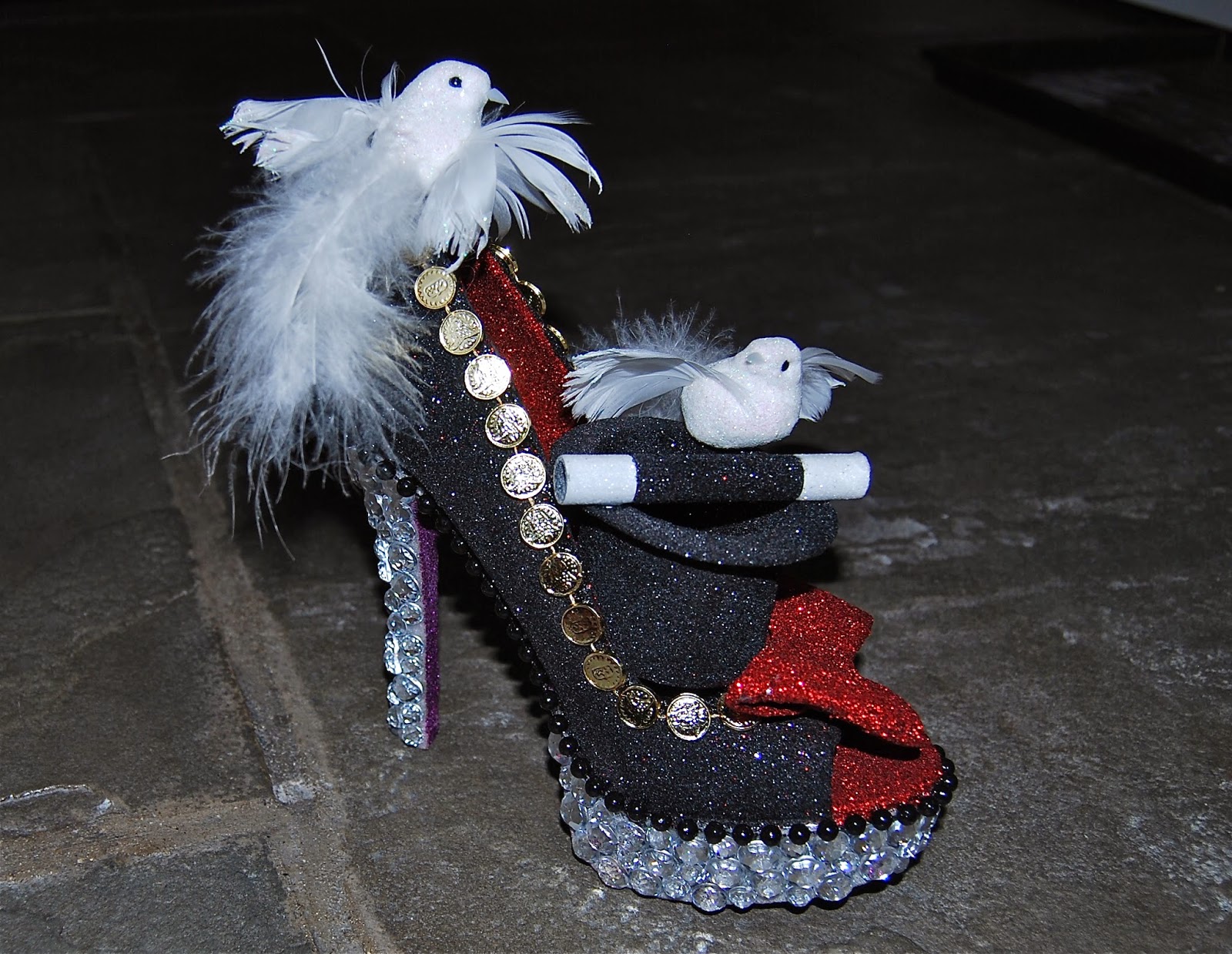 As with any first try, I learned quite a bit making this.  First, yeah, the glitter really does get everywhere, just as every Muse whose blog or interview I read said (fancy that).  I tried as hard as I could but the extra fine glitter, while it looks beautiful when applied, is very hard to contain.  It was all I could do to keep it from being an ingredient in dinner.

Second, you really do need to paint the shoe white before starting, if you plan on using a lighter shade of glitter.  It's probably difficult to tell from the photos, but there's white glitter under the rhinestones.  The original shoe (I'll have to post a photo of it later) had a silver and black snakeskin pattern on the heel - it took me 5 coats of white glitter to obtain even moderate opacity over that pattern.

Third, I found it extremely difficult not to cross-contaminate the glitter when applying each new color.  There was always a little glitter loss after one layer dried, so my white, for example, has just a tiny bit of red in it.  I haven't figured out how to avoid this.  I used Aqua Net (recommended in Confessions of a Glitter Addict) to seal the shoe but didn't apply it until all of the glitter was on the shoe.  Perhaps applying it after every layer would help?

Which brings me to my next issue.  The Aqua Net works just fine on this display shoe, but I'd like to eventually make a pair of wearable shoes (well, probably boots - the irony of all of my crafty activity here is that I don't actually wear heels).  I'd like to find a sealant that will work for a wearable shoe but will not dim the sparkle of the glitter.  If anyone reading this has any suggestions, I'd really love it if you'd share!  I'm thinking of trying Aleene's Spray Acrylic Sealer Gloss...

I haven't had so much fun on a project in a long time.  I already have my second and third shoes lined up with sketches for three more developing.  And I'm making purses à la Mystic Krewe of Nyx as well - although I've had a harder time finding inexpensive suitable purses.  It's definitely on my bucket list now to ride with one of these wonderfully creative krewes once in my lifetime!  In the meantime, thank you to the Muses for the inspiration.

Wow! Talk about a voice from the past. So how tall is the Short One now?

How in the world did you find me again?? Thanks for checking in. He's not as tall as me yet, but he's over four feet! I can't believe how quickly the time goes...

I don't mean to shout but...THIS IS YOUR FIRST MUSES SHOE? It's unbelievably gorgeous, I can't even get over it!

I love the doves, I think they give a really elegant overall effect. Your colors are gorgeous, the OTC black glitter looks great on yours! Maybe I got a dull batch?

Anyways, congrats on such a fabulous shoe especially right out of the gate. Your purses look great too, you have some serious talent!! Can't wait to see the other shoes you mentioned sketching. And if you find a good sealant that doesn't dull, please please do share...it's been a fruitless quest for me so far.

Thanks so much for taking the time to look! I had so much fun making this, I can't begin to tell you. I'm glad you like it! I did find a plastic bunny that fits the hat, so I may try it again. The next two are in the works - glitter everywhere including on my son and husband...

Thank you again for being such an inspiration and taking the time out to blog and share your technique - it was such a HUGE help in figuring out how to make the shoe!

I bought Aleene's acrylic spray, but I'm a little afraid to try it...

If the waiting list ever opens up again, I'll totally be first in line! In the meantime, I figure I can still "throw" my own shoes to my shoe-loving friends.

Oh I get so green with envy every time I see this one. ITS SO BEAUTIFUL. I got the Hats and can't wait to play with them.

OOOOH you found a bunny - can't wait to see more updates and more of your lovely creations.

I've been trying to finish some of my rehabs espcially that ugly flat I sent you, the Queen of Hearts. Need to work on the white- and yes I'm having the same issue with the white.

Maybe Muses will double membership next year and we can both get on that list. :)