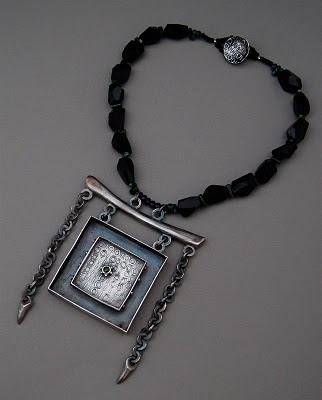 So, I've had this wonderful secret I've been keeping for the past month. Toward the beginning of May I had an unexpected phone call from Fire Mountain Gems and Beads, congratulating me on winning their 2010 Metal Clay, Metal Beads, Wirework & Chain Jewelry-Making Contest. "Wow!" I thought. "I placed first in the Necklace Category!" It wasn't until we were well into the conversation that I realized Fire Mountain Gems and Beads had actually awarded me the Grand Prize Gold Medal, for my entry "I Think, Therefore I Am 2.0".

Some things are so far out of the realm of possibility that it just never occurs to you that it might happen, you know? I nearly passed out - that evening, my husband kept telling me to snap out of it, I was in such a daze. (There's a very incoherent quotation from me on the Fire Mountain Gems & Beads website that comes directly from that telephone conversation.) 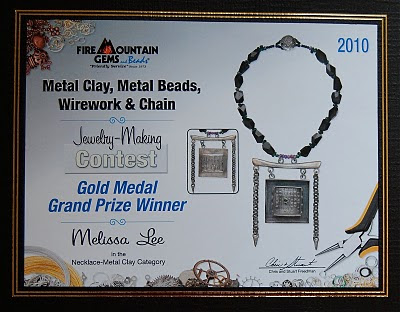 Anyway, Fire Mountain Gems and Beads has now made the formal announcement of winners in this contest, so I can finally share my news and the necklace with you. The photo of the piece at the top of this post is the one I submitted originally to the contest, based on which the piece was juried into the final round of judging.

As you can see, I am continuing to fiddle with my love of binary code as a design element and ended up combining it with my more recent preference for box-making in this design. I had trouble coming up with a frame for the piece, but ultimately chose a Shinto shrine gate as my inspiration here, which I think works well in a cyberpunk setting.

The code states "I think" on the front of the piece and the words "therefore I am" are scribbled in a rough graffiti-like manner on the back of the piece. The quote, of course, is from Descartes, and I mean it to be a reference to artificial intelligence in this setting. I strung the pendant with a strand of beautiful cut black tourmaline, green aventurine and amethyst. Oh, and for the button, I used my binary code "Geek Love" design - the partial word "love" is inscribed across it.

Thanks for visiting. I think I'm going to go celebrate at the park with the Short One now.
Posted by Melissa J. Lee at 1:23 PM

That is just so freakin' awesome! I am not surprised. Your work has gallery written all over it, Melissa! Such a great honor. And I am glad that you are shouting it out! Enjoy the day. Erin

That is SO awesome!! Congratulations!

Congratulations! And your necklace is oh so pretty. Love it! I think your Grand Prize is totally deserved. regards Stefanie

Thanks, everyone! I appreciate it!

I am so happy for you! You deserve it with your wonderful design.

Wow, you have a beautiful brain! love the design, love your style, love the way you think! Congratulations!

That is soooo AWESOME! I love your piece, and I'm so happy to see someone win who has a clean contemporary style rather than their usual ridiculously ornate beadweaving winners. So now you have a big fat store credit to FMG so you can buy more metal clay!
Erin

Thank you! Regina, I think that's the first time anyone has ever told me I have a beautiful brain. Aw, shucks.

This necklace is fa-bu-lous! Congratulations!!! So deserved!

Congratulations Melissa!!!What a wonderfully thought out poetic piece. Didn't know the cyberworld was so poetic but know that you can combine almost anything and make it sing in beautiful harmony. I am so happy for you.

Congratuations! That's so great!!! What a great piece, too!

That is awesome, congrats!

That is so AWESOME! The necklace is just plain beautiful. Congratulations!!!!

An amazing piece! I can see why it took the grand prize. Congrautlations on winning!!!!

A big Congratulations to you! The piece looks just beautiful and I love your 'story'.

(I agree with Erin, nice to see metal clay win the top prize rather than seed beads.)

You have to understand, the Fire Mountain Gems contest was broken up into smaller category contests this year. Thus, there's a completely separate contest for seed beads now. This contest covers only metal clay, beads, wirework and chain.

Thanks for your nice comments!

Congratulations!!! Your work is beautiful and most definitely worthy of a gold medal!!!

Congrats!! Your work always has a great and intresting curve to it Melissa!

Thank you! (Thanks, Cyndi - I needed a hug today!)

Here is another HUG! WOW! am I proud to know YOU!

VERY nice! I also saw your work in the showcase at the B&B show. Congratulations!

Congrats!! You so deserve it.

CONGRATULATIONS! Well deserved! I love the Zen feel it has.

Congrats! That is one freaking awesome piece!

Wow, thanks so much everyone!

Jean, Thanks for the hug (and a big hug back)! I always need one these days, it seems...

Michelle, Thanks for stopping by the Bead Dreams Exhibit!

Christine - so nice to hear from you! I hope you are doing well. Thanks for the hug - hug back!