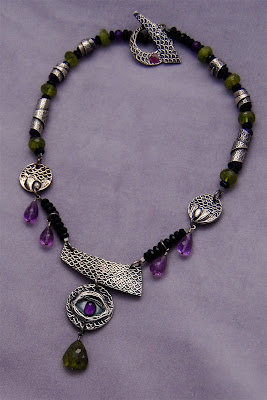 I can at long last show you this piece that I designed in March of this year, entitled "Pacific Dragon". This necklace was a finalist in the 2008 Fire Mountain Gems Beading Contest. Winners have now been announced and, alas, I did not place. However, given that this was my first time entering the contest and only the second design contest I have ever entered, I am extremely happy to have reached the finals. I intend to enter again next year. In the meantime, congratulations to all of the winners, including Cyndi Lavin!

The curved bar in this pendant was inspired by the lines found in Japanese shrine architecture, including the torii gates. I dangled one of my dragon eye pendants from this and created additional links and beads to suggest the claws and tail(s) of a dragon. I also converted my dragon heart pendant into a clasp. This was a really fun piece to create. I ended up running out of time (this was my big lesson in entering contests - START EARLIER), and, as a result, there are maybe one or two things I would have liked to change. Overall, though, I'm happy with it.

Thanks for visiting!
Posted by Melissa J. Lee at 11:42 PM

Looks great! (I have such a weakness for purple, it just isn't funny...)

Do you find the eye piece to be difficult to make?

Thanks! Mmm, the eye piece really wasn't any more difficult to make than the other components. I do find it interesting that you get quite a different look out of it depending on what kind of cab you use (see my store for a version with a black pearl in the center).

The original necklace arrived back on my doorstep today, and I am very happy to have it back!

It's a VERY beautiful necklace - I can see why it was a finalist! That reptile skin texturing is absolutely eye-catching (no pun intended)!

You're doing good work...will you be entering the Rings & Things 2009 design contest? (http://www.rings-things.com/contest/index.html)

--Dave
at Rings and Things

Thanks so much for stopping by! I am terribly sorry - I had every intention of entering the Rings & Things contest this year - but I ran out of time! I will definitely enter next year (and I will definitely start working on my pieces earlier, as well).

That is a great necklace. :)

Thanks so much, Sara - and thanks for visiting!

Awesome pendant. Saw it in Beadstyle mag. Went to read about it and I saw it said it was from Etsy!! WOW shes on Etsy like me!! I then checked out your items. Beautiful. I am PMC Certified so really appreciate your work. Love it!

Thanks, Debbie - I'm glad you like the autumn tree pendant! You do beautiful work, too! I am actually not certified - I've been too busy chasing after the Short One to commit to classes - but I hope to get more formal training as he gets older and starts school.