The Heart Has Its Reasons 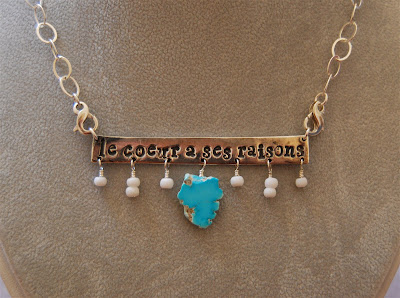 Here's new work from me, based on the well-known quote from Pascal: le coeur a ses raisons que la raison ne connait point. (I realize I need an accent circonflexe above the "i" in connait, but I'm not quite sure how to insert it here, so please take it as given.) I've seen this translated idiomatically a number of ways, but I like a slightly more literal translation: the Heart has its reasons of which Reason knows nothing.

Growing up, I was a big fan of Madeleine L'Engle's book, A Wrinkle in Time

. One of the characters in the book, Mrs. Who, speaks mostly with the aid of famous quotations, and I remember quite clearly that this was one of them.

I believe in it's original context, Pascal was discussing knowledge of the divine, that it is the heart that senses the divine and not reason that knows it. Out of context, I have seen it widely applied to refer to romantic love, and, until the Short One arrived, that was always the sense in which I took it (and, if memory serves, that's the sense in which it's used in A Wrinkle in Time). However, looking at it now, I think it applies pretty well to parental love, too.

In my opinion, having a child results in one of the great paradigm shifts of life. The very second of his or her arrival, one's focus and attention irrevocable changes to the perspective of the little person, who basically takes over the household (at least for a few months/years/possibly decades). Reason and rationality have nothing to do with it - in fact, I'm pretty much convinced by about 5pm these days that I've completely lost my mind, anyway - it's all about the heart.

Anyway, back to the necklace. I was so inspired by this quote that I came up with three separate designs for it. Maybe I'll get around to making up the other two later. However, for now, this version seemed appropriate to express my sentiments on motherhood (about which I've been thinking a lot, as the Short One's birthday approaches). As usual, I made the hefty bar quote from PMC - it is fine silver. The stone is rough cut Sleeping Beauty turquoise which is meant to symbolize the open sky. I've finished the necklace with matte white seed beads and sterling silver chain. It's a simple piece, but I like to think that it's infused with good karma.

There's another reason it's special - I am giving it and other prizes away in honor of the SO's birthday. Please go here for details.

Thanks for visiting!
Posted by Melissa J. Lee at 1:06 PM

So funny that you mentioned "A Wrinkle in Time". My book group is reading it (re-reading it, rather!) this month. We do one children's book each year, and I couldn't think of any classic that would be better. Love it love it love it :-)

Oh, and I love the necklace too!

Isn't it a great book? I think there were a few sequels written after I grew up - I should buy copies and sit down with them...

this is wonderful and so true! lovely work, Melissa!

it's a lovely necklace and so meaningful too! and i agree with you about parental love. i have four children and i when i'm with them, i lose myself!

too bad i wasn't able to make it in time for your giveaway event! i would have loved to get one of your lovely pieces!