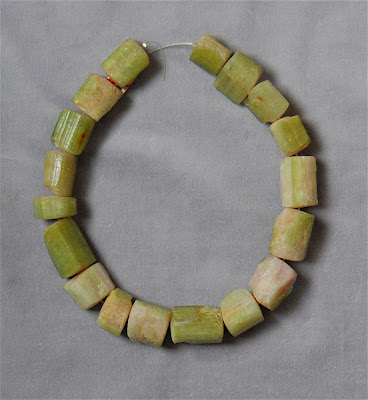 I just thought I'd show off my most recent acquisition. I found this at a show last month (although I wasn't able to purchase it until last week due to tedious technical difficulties and the intervening holidays). Can anyone guess what this is? Celery stalks? Rhubarb? It's actually chunks of watermelon tourmaline crystal. It's a little difficult to tell from the photo, but the color is a nice celery green on top with underlying tones of pink. The pieces really are the size of thick rhubarb slices. I'd never seen watermelon tourmaline cut like this before (for beads, at least) and decided to forgo the multiple strands of intriguing, less expensive beads I had in my tray to purchase this particular strand, instead. It's such a nice spring color - I'm sure you'll be seeing at least some of these beads in upcoming designs this year.

Given that we've had about three inches of snow fall already with a few more inches expected tonight, I find myself thinking (obsessing) about spring designs. Last year, I really used a lot of peridot, amethyst and rose quartz for to signify the season. This year, I'm thinking more of amazonite, blue opal, and well, watermelon tourmaline (not necessarily all at the same time).

In the meantime, the Short One had a ball wading through the drifts of snow while I shoveled today. When we finally came inside, he peered out the window, pointed to his footprints and said "Look, Mommy - animal tracks!"

Have a good weekend, everyone.
Posted by Melissa J. Lee at 9:55 PM