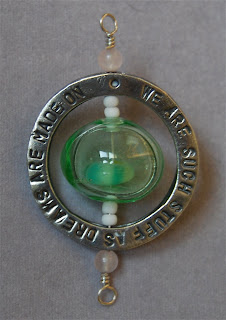 I took a series of photos for this post, but most of them came out massively blurry for some reason, so I gave up and have reverted back to my usual image-lite blogging. This photo, however, does require a little explanation, so please bear with me.

A while back, Carter Seibels held a little contest to name one of her completely gorgeous lampworked necklaces (I couldn't link directly to the necklace, but it's the one in the upper left hand corner). I should probably save this as a random fact about me for the next time I get tagged, but it is a peculiar part of my personality that I can never resist a naming game. What I come up with may not be terribly apt, mind you, but I love coming up with names (which, frankly, made the ultimate name game - what moniker to saddle the Short One with - difficult, as H. and I came up with dozens of candidates, but that's another story). Anyway, having spent two years playing with the SO's toys, Carter's lampworked beads reminded me very strongly of jungle animals. I also knew from her blog post that Carter had been specifically working to create the beautiful rectangular shapes of the beads. So I came up with "Geometric Safari", which - as you can see on the link - is the name she ultimately chose for the piece.

As my prize, she sent me a beautiful sea green hollow bead with a smaller lampworked bead inside of it. I was smitten with it the minute I saw it - the bead seemed very kinetic, and I wanted to preserve the sense of movement in it. The construction also reminded me vaguely of a spherical astrolabe, also called an armillary sphere (if you are unfamiliar with spherical astrolabes, you can see an illustration of one here). I am a huge fan of historical mechanical instruments of all kinds, but none are quite so romantic to my mind as astrolabes and orreries, those devices that were created to simulate the motions of heavenly spheres.

I sat down to think of how to turn this concept into a working pendant and ultimately came up with the above. Initially, I wanted to have two concentric fine silver rings, but the size would have made the whole thing unwieldy, so I settled for one. The ring is stamped on each side with a favorite quote from (who else) Shakespeare's "The Tempest": "We are such stuff / As dreams are made on". I managed to preserve a sense of motion in the piece - the bead spins, the ring swivels (actually, I keep thinking that the whole thing would probably make a fun cat toy if it weren't so, well, fragile and expensive). Sometimes, in my design process, the end result doesn't really resemble the initial concept all that much, but I think it translates fairly well here.

Many thanks to Carter Seibels for the beautiful bead and the great inspiration!

And thank you for stopping by!
Posted by Melissa J. Lee at 10:21 PM

This is really great..I especially like the wording that you chose. It adds to it somehow.

Thanks, Betty and Jean! I appreciate it!

Ooh- I am just now seeing this.
It really does look great! So fun for me to see what other people do with my beads!
Carter