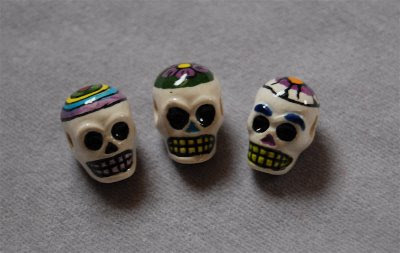 I've been meaning to show you these beads for weeks. Aren't they cute? I had a hard time limiting myself to just three of these Day of the Dead beads, as each one in the bowl was painted a little differently. I was going to say, "Guess where I found them?", but since the title of this post sort of gives it away, I suppose I'll resist the urge.

As part of his extended birthday celebrations, we took the Short One down to Chicago to visit a couple museums, including The Field Museum. Both the Husband and I were avid dinosaur enthusiasts in our shorter days (and, of course, I had a great interest in gem and minerals, too). We're both hoping the SO will take after us in this respect - and, really, have you ever met a little boy who didn't like dinosaurs? Oh, and before we get off the subject of dinosaurs, the Natural History Museum of Los Angeles County has the coolest dinosaur puppet roaming the halls - I would love to see this in person:

Anyway, where was I? Oh, yes, the beads, the beads! So, we went down to the natural history museum in Chicago, and I decided to check out the gift store for any interesting rough cut stones I might be able to use in my jewelry. As it turns out, I didn't buy any stones, but I did find a surprising array of unusual beads - cat goddess beads from Egypt (Bastet or Bast, I believe she is called), Day of the Dead beads from Mexico. There were a few others, but they escape me, unfortunately. I know not everyone who reads this lives near The Field Museum, but I suspect many museums, especially the larger ones, may yield such interesting finds (if you know of any near you, please do leave a comment). So if you live near one, or will be traveling to an area that has one, be sure to check it/them out for beady finds, along with your usual array of bead stores (and rock shops, of course!).

Thanks for visiting!
Posted by Melissa J. Lee at 1:22 PM

I wouldn't have thought to look at museums for beads! We're planning to head to the Field Museum when the weather gets a little bit nicer. My son can't wait to see the dinosaur.

They have some really beautiful finished jewelry there, too - lots of it completely made me drool!

My whole problem as a kid in NY was deciding between The Museum of Natural History, WHERE THE DISNOSAURS WERE!<-- I adored them all! All sorts!
and The Metropolitan Museum of Art<--where the jewelry is! I wanted to go to them both and the trouble is they are accross town from each other and it's a BIG TOWN, NYC is.
I usually ended up at the Met, discovering ever new sections such as French clocks and pocket watches, which I found so fascinating when I became older and was able to drag myself away from the ancient Egytian treasures and all the other ancient jewelry. Museum jewelry and Tiffany's jewelry frankly, are the basic reason I am in this business! They both thrilled me as a kid. Now if I could just get some dinosaur customers to wear the stuff I design! :)